At the American Society of Cataract and Refractive Surgery today, July 26th 2021, Dr. Stephen Slade was presented with the prestigious Charles D. Kelman Innovator Award – an award that comes with so much behind it.

To say we are proud of Dr. Slade for receiving this is such an understatement. This article is meant to share what this means and why we feel he is so deserving.

First, a little about the history of this award for those of us who are not familiar will help explain!

Charles David Kelman (1930-2004) was was an ophthalmologist, surgeon, a prolific inventor, jazz saxophonist, composer, entertainer, and Broadway producer. Besides clearly being VERY well-rounded, he is most known in the ophthalmology community as the father of phacoemulsification, (basically making cataract surgery what it is today) and he developed many of the medical devices, instruments, implant lenses and techniques used in cataract surgery.  Before the ‘phaco’ technique, Dr. Kelman also invented ‘cryosurgery’ or cryo-removal of cataracts in the early 1960’s, before his phaco surgery became the modern standard of cataract treatment, as well as the use of freezing in reparing retinal detachments!  It is said his work completely revolutionized cataract surgery, making it the easier procedure we have been witnessing for years in our lifetimes.  Dr Kelman received countless awards in his lifetime, from ophthalmology organizations as well as the Presidents of the United States.

In 2004, when Dr. Kelman passed due to a long battle with cancer, the ophthalmic and medical community lost an incredible, talented, multifaceted inventor as well as one of the greatest ophthalmologists of the 20th century.  The Innovators General Session at the ASCRS meeting is the premiere event to learn about the latest innovations in ophthalmology, and holds presentations for unique and inventive topics. This session ends with the prestigious Charles D. Kelman, MD, Innovator’s Award and Lecture.  ASCRS has annually bestowed this honor and medal since its inception in 1985 to an individual whose innovative ideas have benefited ophthalmologists and their patients. Lecturers include some of the world’s most prominent pioneers in ophthalmic surgery. In 2002, ASCRS renamed the Innovator’s Lecture in order to honor and recognize Dr. Charles D. Kelman’s lifelong contributions and innovations.

Dr. Stephen Slade, known regionally, nationally, and internationally as a thought leader, innovator, and educator in the field of refractive surgery has in a very short time, made quite the mark on ophthalmology and refractive surgery; and has done so in a way that has not only benefited his patients, but countless ophthalmologists globally. He has contributed to many ‘firsts’ and helped shape the lives of millions of patients in his lifetime.

He was the first doctor in the United States to use the Femtosecond Laser for cataract removal, giving him the nation’s longest experience with Laser Cataract Surgery. This high-speed laser took over several of the steps in cataract surgery that were done by hand and is now used quite regularly by most refractive surgeons who perform cataract surgery. Laser cataract surgery, which allows surgeons to get better precision with parts of the procedure, also allows less of the ultrasound energy to be needed.

As an active researcher and medical monitor for several new technologies, Dr. Slade was a lead investigator and presented the data to the FDA for panel approval for both the Crystalens (Accommodating IOL) and the ICL (Implantable collamer lens) and thus, has been the first surgeon in the U.S. to implant SEVERAL intraocular lenses for cataracts, as well as the first surgeon to perform multiple new refractive treatments outside of LASIK for vision correction, like the ICL. Some other technologies he has served been involved in the research for include: laser cataract surgery, wavefront LASIK, ICLs, femtosecond lasers, keratophakia and accommodating IOLs.

Dr. Slade is also an active instructor of surgical techniques and has taught and certified over 8,000 surgeons in LASIK and lamellar refractive surgery. Known as the ‘surgeon’s surgeon’ over 500 have chosen him for their own surgery.

Dr. Slade has received countless awards including 18 named lectures, Refractive Surgeon of the Year, two China Service Medals, the Lans Award, the Casebeer Award, and the 2007 Barraquer Award. Dr. Slade was selected by his peers for “Best Doctors,” “Texas Super Doctors,” and “Best Doctors in America” and has received the Senior Honor Award of the American Academy of Ophthalmology. He is a regular presenter at medical meetings and has received several “Best Speaker” awards and has twice won First Place at the American Society of Cataract and Refractive Surgery Film Festival. He is on several editorial boards, including the Journal of Refractive Surgery, and serves as Chief Medical Editor of Cataract and Refractive Surgery Today as well as President of the American College of Ophthalmic Surgery.   In 2016, Dr. Slade was awarded the 2016 Star of Texas Healthcare Award (see left photo) and is the current chairman of the board for AECOS (the American-European Congress of Ophthalmic Surgery). 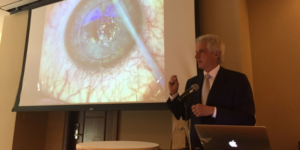 Dr. Slade holds 5 patents or patents pending in the field, has produced many articles and book chapters, and has authored or co-authored 8 textbooks on ophthalmic surgery. Dr. Slade has appeared on ABC, CBS, CNN, New York Times, Wall Street Journal and was the featured surgeon on the Emmy award-winning PBS documentary “20/10 by 2010?” narrated by Walter Chronkite.

It’s clear that Dr. Slade has remained on the cutting edge throughout his time in practice by staying involved in research and education, and although we look at him as OUR specialist in Presbyopia correction, cataract surgery, LASIK, Implantable Contact Lenses, and refractive surgery at our office in Houston, Texas, Dr. Slade is so much more than that.

“Dr. Slade is a thought leader in his field and his contributions have irrevocably shaped the lives of millions of patients,” said PTV Founding Managing Director Matt Crawford when presenting Dr. Slade with the Star of Texas award. “We are honored to be able to recognize his outstanding contributions to healthcare innovation.”

We thank ASCRS for this well-deserved recognition for Dr. Slade and are so excited to share about it! Congratulations Dr. Slade and thank you for all you do for our patients, for us and for our clinic, day in and day out! 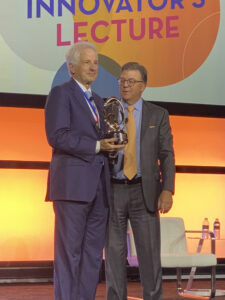