Home » Blog » Major League Baseball gets a superstar thanks to Corneal Crosslinking CXL!

Major League Baseball gets a superstar thanks to Corneal Crosslinking CXL!

After hitting 14 home runs in his first 136 games in the major leagues, Tommy Pham hit 23 last season in 128 games.  But did you know he almost didn’t make it out of the minor leagues due to a disease?

“We’d been working with some eye doctors in various parts of the country because one of our high-profile Dominican signees had vision problems, we voided the contract, he signed with another team and he never made it out of A ball.  Going through that process was really eye-opening for me, no pun intended. Because most major league hitters have above-average vision, 20/10, 20/12, 20/14. Often, even if you’re 20/20, you’re not good enough to be a big league hitter. It’s depth perception and contrast sensitivity that make them able to see a ball in a way that most human beings just can’t do. It became clear to me that vision was an incredibly important part of the formula, and if you had an elite athlete with poor vision, your chances of being a major league player were low.”

The story of Tommy Pham’s vision is what sparked this article and we want to share his encouraging story with you.

Tommy Pham, suffered from keratoconus = a corneal disease MANY of our patients deal with on a daily basis.

For those of you who don’t know, Keratoconus is a degenerative disease which affects your cornea. It causes the collagen to weaken and thereby causes your cornea to bulge out.  Their vision is comparable to what you see if you would bend a mirror and approximately 1 in 500 to 2,0000 people suffer from it, which makes it a lot less rare than we would like.

Walking into an ophthalmologist’s office in Los Angeles literally saved Pham’s baseball career after his 2011 season.  He underwent a procedure called Corneal Collagen Crosslinking or “CXL”.

The CXL procedure (which you can learn about here) involves the use of an ultraviolet light and a vitamin application (which is essentially like vitamin eye drops) that only takes approximately 30 minutes.  It is considered very non-invasive and the goal of CXL is to stabilize the cornea (and the keratoconus).

So how did he know he had keratoconus?

Tommy Pham hits an amazing home run in a Class A game, and as he walks back into the dugout, one of his teammates asks him, “do you know what kind of pitch that was?” 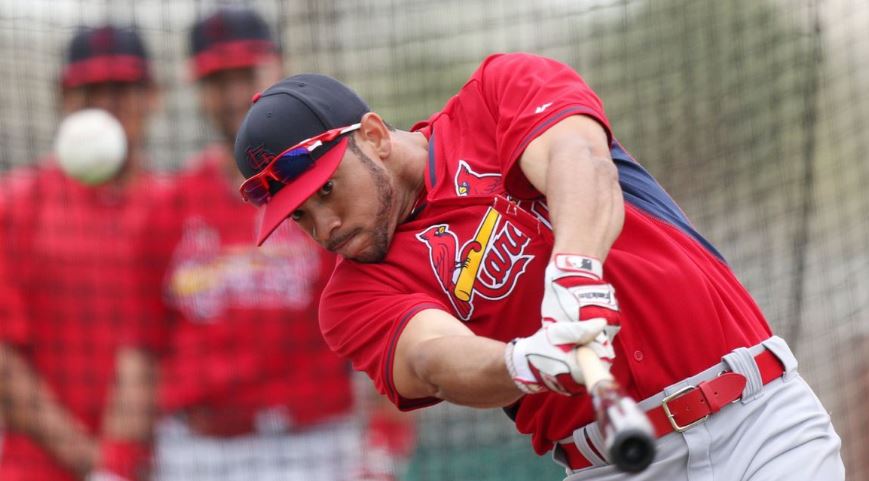 His teammates started murmuring to each other and all who saw his swing basically broke it to him that night, “nope, Tommy, that was a slider.”

“And when I saw the video, they were right, and I was wrong,” said Pham.  He instantly realized that there must be a direct correlation to his high strikeout rate in Quad City that summer and the other frustrating hurdles he had consistently been facing which were holding him back from progressing.  Pham immediately went to LensCrafters and was fit with glasses that he threw away in less than a year’s time due to the fact he felt they weren’t helping him anymore.  We hear a similar story from all of our CXL candidates.

That same year, a St. Louis eye specialist diagnosed Pham with keratoconus something he knew nothing about. Another similar story we have at our Center – most patients just know their glasses keep failing them. When he was diagnosed is when learned why glasses do not work for keratoconus patients.  With glasses the prescription is right in the middle of the lenses.

In baseball, a good hitter is supposed to keep his head still and follow the ball with his eyes.  If you try to do that while wearing glasses, your eyes will eventually move out of the center of the lenses, so you completely lose the benefit of any prescription in the glasses.

A frustrated Pham realized this is why he was moving his head instead of his eyes while following the ball.

Okay, so no glasses. What about contacts?

Still not enough.  Patients with keratoconus cannot find a contact lens to fit their eyes correctly because the degeneration of their corneas makes their cornea oval shaped while the contact lenses are round.

After Pham suffered another terrible season in 2009, the doctor in L.A. reached out to Pham and offered him the Crosslinking procedure at no cost. At that time, Pham was really faced with a difficult decision as the procedure was not approved by the U.S. FDA.  However, after doing his research on success rates, facing the crazy lens costs (the last pair cost him $11,500) he had been paying for and the fact he really needed help to achieve his dreams, Pham went for it.

Pham travels everywhere with a bag full of tools for his vision, extra contact lenses, solution and hand sanitizer; not to mention the small makeup mirror he carries in his back pocket even during games to adjust lenses in the midst of an inning if necessary.

Prior to CXL, the best option for people with keratoconus was a corneal transplant.

Pham has put in so much through his career that he has learned from, from playing 809 minor league games over 12 seasons and going through 2,338 minor league at-bats before he was able to take any part in the major leagues in 2014, he has learned everything there is to know about how important the human eye is.

He has had to get used to gas permeable, hard lenses which require a corneal topography machine. This machine makes maps of his eyes and traces his corneal surface to get the best fit.

He even tried a soft lens in 2016 which made him see better than ever; however, when he ran, these lenses would jiggle in his eyes and blur his vision. During the 2016 All-Star break, Pham traveled to the University of Iowa for a consultation with the inventor of that particular soft lens—and that lens ended up not working for him.

After a lot of trials, aches, injuries, lens failures and tribulations, Pham is sharpening his hitting and working on his speed.  He shared in this article, “I really want to be the best me.”

Pham is an ambassador for the National Keratoconus Foundation and wants to actively speak to groups about the condition.  Pham visits his eye doctor in L.A. every year to check up on his vision.

The article shares how ‘perseverance’ fits Tommy Pham better than anything.  He has truly had to go through so much to hit the success he envisions.  A story like this, where an athlete in a sport that requires better than just good vision to “make it” is truly inspiring to our patients who hear the word “keratoconus” for the first time. And thanks to Tommy Pham, we can share it!

If you or a loved one has been diagnosed with keratoconus, please call us today to schedule a Crosslinking Evaluation with our doctors at 713-626-5544.